Networked Events
Entities
Verbs
»Verb List
»Verb Groups
Events
Dates & Time
Events are the core of NanoHistory's Networked Event Model (NEM). An event traces an interaction between an agent and an object as a unnamed directed graph. The resulting unnamed graph is given a unique identifier, which in turn allows it to be used as a node in subsequent interactions. Events themselves remain unnamed, as naming an event is a critical part of historical writing and analysis. It is highly contentious. As such, Nano-History also allows users to create 'names' as simple entities under which they can group and collate events, along with people, places, organizations, and things. 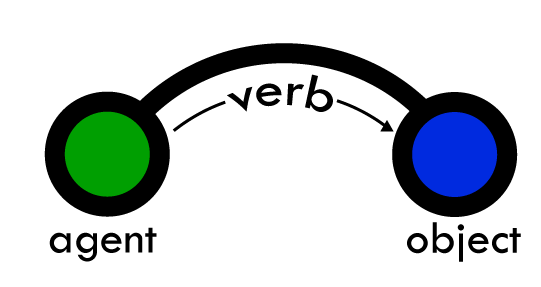 Other event models offer a much smaller range of event types, and seek to classify events rather than describe them. Our list of verbs doesn't act as a way of classifying interactions or events. Rather they focus on the interactions and relationships themselves. There are several advantages we think for doing this. Aside from more breadth than other event models like Schema.Org's or Motools, because we're using a vocabulary, the list is expansible in variety of ways. It also allows us to think about agency as well.